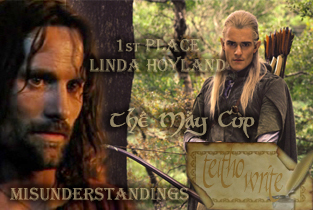 The May Cup by Linda Hoyland

I borrowed these characters from Tolkien and make no money from this story.

With thanks to Med Cat.

Eldarion was bored. He was supposed to be playing with his wooden bricks, but the castle he was building was the wrong shape and he'd already built two forts and three castles and knocked them down again. He wanted his mother or father to play with him, but they were engrossed in a conversation. It was very boring, but Eldarion listened, hoping they would start talking about something more interesting soon.

"I think everything is ready for the Emperor of Rhûn's visit," said Aragorn.

"I hope we have done all we can," said Arwen. "I know nothing about him or his people,though."

"They are a fierce but highly cultured people," said Aragorn. "Both the men and the women have a great fondness for fine garments and make up."

"We must do our best to make our visitors feel at home," said Arwen. "You will help us welcome him, Eldarion, will you not? You are a big boy now."

"Thank you." Arwen turned her attention to Eldarion's bricks. "Shall we build something together, or would you rather I tell you a story?"

Arwen smiled and began to tell her son a story about her childhood.

Later that night when Eldarion was supposed to be asleep in bed, he pondered on his mother's words. This was the first time he had been allowed to help entertain a visiting ruler, apart from King Éomer, who was more like a sort of uncle than a king anyway. The little boy was determined to make the Emperor of Rhûn feel at home and make his parents proud of him. The only problem was how? He could show him his favourite toys and invite him to play with them like he did with King Éomer , but somehow he didn't think that was what his mother meant. What had his father said? That the Emperor liked nice clothes and May Cups. Well, he didn't think his clothes were any use to the Emperor as they would be too small, so he would have a to find him a May Cup. What was a May Cup, though? It was July now and Eldarion hadn't noticed people using different cups in May, unless he had forgotten. His father would surely know as Ada knew everything. With that comforting thought, Eldarion fell asleep.

The next morning, Eldarion managed to sneak away from his nanny and make his way to his father's study. To his relief, the door was open as a servant was bringing Aragorn his mid morning refreshments. The King dismissed the servant and turned to his son, "What are you doing in here, Eldarion? You are supposed to be in the nursery."

"Of course, but I have to return to my work soon." Aragorn smiled encouragingly at the little boy. "Would you like a honey cake?" He gestured towards the tray on his desk.

Eldarion took one and nibbled it for a moment, then he said,"What is a May Cup?"

For a moment, Aragorn looked puzzled and stroked his beard thoughtfully. Then his expression cleared. "Ah, you must mean the Goblet of the Dúnedain. This is one of our ancient treasures which belong to our family. In the North, we hold a great festival on May Day to honour Lady Yavanna." He went over to a cupboard behind his desk and took out a small goblet. It looked very old and was engraved with a pattern of leaves and set with green gems. "The Chieftain asks Lady Yavanna to make the land and the people fruitful and we drink from this goblet."

"She dwells in Gondor and Rhûn, and in Rohan, and all of Middle-earth," said Aragorn.

Before Eldarion could say anything else, his nanny appeared looking flustered. "Ah there you are, Master Eldarion!" she cried. "I'm sorry, sire, if he disturbed you."

"Not at all," said the King. "I was just taking my mid morning refreshment and my son decided to join me. It is time he return to the nursery now, though. I will see you later, Eldarion."

Eldarion didn't see his father that night as the Emperor arrived and spent the evening talking to the King in his study. There was a formal reception the next day that Eldarion had been told he could attend.

Now that his father had shown him the May Cup, Eldarion decided he would welcome the visitor by offering him a drink of water in the goblet. How proud his father would be.

Early the next morning, before his nanny was up, he went to his father's study. The door was open, but there was no sign of his father. The cup was in the cupboard where he had seen his father put it the day before. Eldarion hesitated for a moment, then recalled his father's words about it belonging to the family. That meant it was his as well as Ada's. He slipped the cup in the pocket of his robe, then when his nanny helped him dress, transferred it to his tunic pocket. She was distracted this morning and chattering about the Emperor's visit.

When Eldarion was taken to join his parents in the Great Hall, he found them looking troubled.

"It has gone," Aragorn told Arwen in a low voice. "I showed it to the Emperor last night and now it has gone!"

"Who else has been there?" asked Arwen.

"Only trusted servants whose honesty has been proved over the years. The Guards stationed in the corridors saw no intruders. If the Emperor has stolen it, it is a gross insult!"

"You cannot just accuse him. It could lead to war. And what of the treaty we hope for?"

Before Aragorn could answer, the Emperor and his Entourage entered. Eldarion could not but help staring. The Emperor was dressed in a bright red and yellow robe and his face was heavily painted.

While the formal introductions were being made, Eldarion went to where a servant stood at the side with a jug of wine and asked him to fill the goblet. Used to doing what he was told, the man complied.

Eldarion then walked up to the Emperor and offered him the cup. "Welcome to Gondor, my lord. I bring you the May Cup to welcome you."

For an an instant, the King and Queen stared dumbfounded. Aragorn was the first to regain his composure. "May Lady Yavanna grant us her blessings and friendship between our nations forever flourish!"

The Nobles of Gondor echoed his words. The Emperor took the cup and drank from it, then returned it to Eldarion. He was smiling.

"Whatever were you thinking of, taking the Goblet of the Dúnedain?" Aragorn demanded when he was alone with Eldarion later that day. The two were in his study with the goblet on his desk. "I thought the Emperor had taken it. You could have caused a serious incident ion nîn, or maybe even a war!"

"I would have asked you but you weren't in your study and you said the cup belonged to our family. I was trying to make the Emperor feel welcome and I heard you say he liked May Cups."

Aragorn stared at his son in bewilderment. "May Cups?"

"Yes, cups to drink out of in May, and you told me that goblet was a May Cup. I didn't think it mattered that it isn't May."

Aragorn suddenly burst out laughing. "I said make up, not a May Cup."

"But they sound just the same!" Eldarion protested.

"I suppose they do," Aragorn conceded. "You will know little of make up since your mother is too fair to have need of it. Make up is face paint like rouge and powder."

"You are forgiven as long as you don't take family heirlooms without asking again. All has worked out well, as the Emperor thought we were honouring his favourite deity. It seems he too reveres Yavanna, albeit under another name. He has signed a treaty which will ensure peace and prosperity for both our lands." Aragorn picked up the cup and regarded it thoughtfully. "This has languished too long in a cupboard. Next May, whether we are in Gondor or Arnor, we will celebrate Yavanna's feast with dancing and feasting."

"We will go out into the countryside and enjoy the festival," said Aragorn. " It is time this was a May Cup again."

A/n. This story is based on my believing as a young child like make up was a cup to be used in May after overhearing a conversation my parents had. Written for the "Misunderstandings" Teitho challenge where it was placed first.