I do – by Linda Hoyland

Summary – What does it take to frighten Aragorn?

Disclaimer: These characters all belong to the estate of J.R.R. Tolkien. This story was written for pleasure and not for financial gain.

With thanks to Raksha. 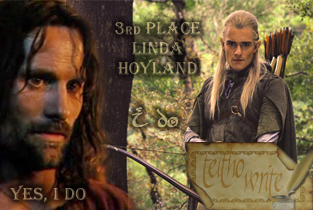 Never before Aragorn felt so afraid. He had faced countless perils in this long life, but never before had he felt his heart pounding so hard that it felt as if it might burst. This was not the icy dread he had felt when facing the Nazgûl, but a very different kind of fear.

"It is almost time." Faramir's voice roused him from his whirling thoughts.

Aragorn took a deep breath and studied his reflection in the looking glass. He hardly recognised the richly clad personage who stared back at him. He was clad in a black tunic, embroidered with mithril and black breeches, over which he wore the same white mantel he had worn at his coronation. His unruly hair had been washed, and then brushed until it shone and his beard was neatly barbered. The Star of Elendil adorned his brow. And he smelled of rose water; it must have been poured into his bath that morning.

"You look every inch a King my lord," said Faramir. "Your lady will be well pleased."

Aragorn forced himself to smile at the young man, though his words only served to intensify the rising sense of panic within him. He was indeed a King now and could make Arwen his Queen, but could he ever offer her all she deserved? Would she look at him and think of the mighty Elves she could have chosen to wed? Then he knew so little of the arts of love. Would he be able to delight her as a husband when they came to lie together?

Aragorn had waited for this moment since he came to manhood. How could he ever be ready to ask so much of the woman he loved? She was forsaking the life of the Eldar and the company of her kin until the remaking of the world.

Aragorn shook himself inwardly. She would lose much, but also gain much, the children they would raise together and at the last; the Gift of Men, the freedom to move beyond the circles of the world.

Faramir coughed. "They are waiting for us,, my lord," he said, sounding somewhat anxious at his liege's tardiness.

"I am coming. "Aragorn took a deep breath and followed Faramir outside to the Court of the Fountain. He hoped that none would notice how he was trembling. What if he forgot what he was supposed to say?

The summer air was scented with the White Tree's fragrant blossoms. The fountain sparkled in the bright sunlight. The courtyard was crowded and a cheer rang out as the King appeared.

Aragorn was deaf and blind to everything around him. As if in a dream, he followed Faramir to where Gandalf was standing beside the White Tree. He smiled benevolently at Aragorn.

There was no sign, though, of Arwen. Aragorn looked around him wildly. What, if now the moment to decide had come she changed her mind? Surely, this was something he should not fear though. Arwen was of steadfast heart. She would never forsake him. She had given him her pledge.

Then she, appeared, leaning on her father's arm. Her beauty eclipsed the dancing sunbeams while her eyes were brighter than any star in the heavens. She wore a gown of blue and silver and her hair was braided with bright gemstones. She looked into Aragorn's eyes and his fears melted away like mist in a morning breeze.

Master Elrond placed Arwen's hand in Aragorn's. Faramir, who stood at Aragorn's side, then handed a silken cord to Gandalf, which he twined around Aragorn and Arwen's wrists.

"Aragorn, son of Arathorn and Gilraen, do you give your solemn vow to take, Arwen, daughter of Elrond and Celebrian in wedlock? Will you bear love and faith only to her until the ending of your days? Will you cherish her and keep her, and raise her children with love?"

Aragorn turned and smiled at his bride, his eyes filled with love. "I do," he said. "With all my heart, I do."

A/n. Written for the Teitho "I do" challenge where it was placed third.