The Time That is Given

The Time that is Given – Linda Hoyland/ Raksha the Demon

"All we have to decide is what to do with the time that is given us." - Tolkien - The Lord of the Rings.

Disclaimer: These characters all belong to the estate of J.R.R. Tolkien. This story was written for pleasure and not for financial gain.

With thanks to Deandra and Virtuella. 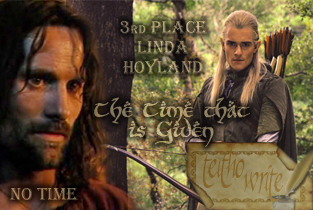 The young soldier coughed a shower of crimson droplets over the blankets. He struggled to breathe. Aragorn sighed deeply as he tried to ease his patient's pain. The man was slowly choking in his own blood. Time was swiftly running out for him There were some hurts that even Master Elrond would not have been able to mend, such as the arrow wound to the lung that this lad had taken. The wounded man reached out a trembling hand. Aragorn swiftly crouched beside him and took the outstretched hand between both of his own.

"Tell Miriel – my boy – love them." The young man regarded him urgently

"I will, Finrod," Aragorn replied. "I promise they will be provided for. Your son will know that his father died bravely."

"Imagine now you are sitting on a river bank with your wife and son beside you." Where was Finrod's home? Near Linhir, he had said a few days past, in a brief exchange the night before the battle. Aragorn searched hastily through his own long memory, seeking the sights and sounds of the rivers of Lebennin. Then he continued in a low and soothing voice: "The river warblers are singing and a cool breeze is blowing from the river Gilrain as its waters flow merrily southward. You have a bottle of fine wine to share and your lady is smiling. You can hear your little boy's joyful laughter."

This time, a genuine smile lit up Finrod's face. "The sun gleams in Miriel's hair – so fair!" He gave a deep sigh and breathed his last. Aragorn took a final measure of the stilled pulse, then closed the young man's brown eyes forever

Aragorn slowly rose to his feet. He stood for a moment sadly looking down at Finrod's lifeless body.

A sergeant approached him. "Sire, Lord Faramir asked me to remind you that a despatch rider leaves tonight with letters. Do you want me to write to this man's wife?"

"I will write to her myself. See that this soldier is buried decently with all due respect." Aragorn's tone was sombre.

"The battle went well, sire. We routed the Haradrim. They lost at least a hundred men. We lost but twenty."

"All men who should have lived to see their grandchildren, were it not for this cursed rebel leader! The Kha Khan of Harad keeps the treaty he signed to respect our borders, but there is always some hothead, alas, ready to lead young men to their deaths. See to it that the Haradrim dead are also decently interred."

Aragorn strode from the healers' tents, but instead of heading straight back to where the commanders were housed, he took a walk around the camp. Losing men was all too familiar an experience to him, but it never ceased to strike him as a personal blow. Nor should it, he told himself. Only a tyrant or an Orc could fail to care about the loss of life that war brought. He had hoped his reign would bring peace, which, by and large, it had done, but always new warlords brought strife from the South and East.

Finrod had been so young, having not even seen thirty years. The nineteen other dead were older and even younger - two Rangers, three mounted warriors, eight walking soldiers, two scouts and even a luckless messenger boy. None of them had the Elven-tinged blood of the Dúnedain; and had shortened their merely mortal days in the service of a king who was hale at well- nigh a hundred and could foresee many more years ahead, barring some blow from an enemy weapon. Aragorn's heart ached for them. Was it right that Aragorn Elessar was born to so long a life, while these brave men gave up their shorter spans to fight for him?

The messenger boy, a sturdy lad called Bregor, had grown his first beard during the campaign. Bregor had been so proud when Aragorn had noted the dark fuzz on the boy's chin; and vowed he would grow a proper beard, like his father who had died fighting the Easterlings.

So many years, so many missions and raids and battles. So many good men losing their time, while he went on and on, following his own very long road.

Does the Lady Vairë laugh at us as she weaves our destinies into her tapestry, Aragorn wearily wondered. Or does she weep?

Finrod and Bregor deserved more time. So did all their fallen comrades.

At least, he had been able to ease Finrod's dying moments, but how he wished he could have brought the young soldier home safely to go fishing with his child. With a start Aragorn realised he had long since promised to take Eldarion fishing, but had not yet found time to do so. Aragorn vowed inwardly to put aside an afternoon for a trip to the Anduin as soon as he returned from this campaign.

It was growing late and a glow in the western sky was all that remained of the sunset. Soon the stars would shine out over the Poros, their constant presence bringing comfort to men far from hearth and home.

The King paused at a handful of campfires to say a few words to the men. At the far side of the field, he could see his Steward doing likewise. The men were in good spirits. Once the area around the riverbank was secured, most of them could begin the long march home. A company of men would have to remain behind until they were relieved, though, to guard the Harad Road against further incursions. They had escaped lightly this time, but Aragorn had no intention of dropping his guard. The rebel warlord had escaped and, if he managed to regroup, could still pose a threat. He would ask the quartermaster to supply extra rations for those left behind. They had more than enough supplies as the campaign had been of short duration.

Aragorn blinked and rubbed the back of his hand across his tired eyes. It was time to return to his tent and snatch a few hours' sleep, but he still had letters to write before the messenger departed. These were the missives he found most burdensome; letters to the families of the fallen. Elessar Telcontar could at least tell the fallen soldiers' kin that they had died fighting for their king; and assure them that they would receive pensions.

There was still one more letter to write, Aragorn thought with a pang of guilt. Arwen would sense at once had any ill befallen him, but even so, she would fret for his wellbeing. He should have written days ago, but had just not found the time.

As soon as he reached his tent, Aragorn called for food and a cup of wine and began his task. He had twelve letters of condolence to pen, the other fallen had come from the White Company, and Faramir preferred to write to the families of the men he had known.

The candles had burned low by the time the sad task was completed. By now, Aragorn was struggling to stay awake. He had hardly slept during the past days. He was determined to write to Arwen .The despatch rider would leave at midnight and travel through the night so there was no time to lose.

Strangely, his sadness had eased. The gulf Aragorn had felt between himself and the men he had led to their deaths seemed less wide. Perhaps, because while he had a longer life than many men, he lived it much the same as they did; feeling the same joys and sorrows, filling up the hours with duties both large and small, the everyday tasks of living.

He dipped the quill in the ink and began to write, "Beloved, you have been constantly in my thoughts since I took my leave of you, but I have lacked the time to write. I hope you and Eldarion are faring well in my absence."

Aragorn rubbed his smarting eyes. There was so much he wanted to say to Arwen, but his weary brain could hardly form the words. He yawned and reapplied the quill to the paper. "I hope that I shall…

"Sire, the despatch rider is ready to depart." Faramir called through the tent flap. When there was no answer, he went inside.

Aragorn was slumped over the small table that served as a writing desk when on campaign. As Faramir approached, he began to snore softly. The Steward noted the half- written letter beside his lord. A large inkblot disfigured the parchment, where the quill had fallen from his sleeping hand.

Faramir took up the pen and added a message in his own neat script "My lady, the King is well, but exhausted. He should be reunited with you ere the week is out. He quickly signed his name and sealed the letter.

Faramir collected the letters and took them out to the waiting despatch rider to be added to the already bulging bag that the man carried. He then returned to the tent and half dragged, half- carried Aragorn to his cot. The King hardly seemed aware of his presence. Faramir smiled indulgently and covered the sleeping man with a blanket. There would be time enough in the morning to chide his lord for not taking better care of himself. Faramir chuckled softly at the memory of how often Aragorn had given him the same advice, which he too, often failed to heed.

Faramir suddenly recalled a favourite saying of Gandalf 's, "All we have to decide is what to do with the time that is given us."

What indeed. Some wasted that time on trifles, lust or greed. Some watched it go by. Some lost it through battle or misadventure. And then there were the few who lived every last instant to the full, through both joy and sorrow. Such were, perhaps, the heroes of legend. Such was his King and friend.