Fire in the Blood

Fire in the Blood – Linda Hoyland

Dedicated to Shirebound on the occasion of her birthday.

With grateful thanks to Raksha and Deandra for help with editing and Dreamflower and Lignota for plot ideas. 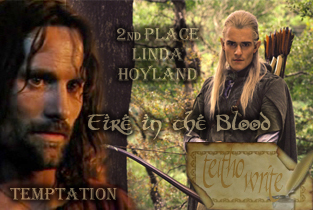 “It is kind of you and Strider to visit me, Lady Arwen,” said Frodo. He gestured for his visitors to sit on the couch beneath his window.

“I was concerned that you decided to eat alone in your room tonight,” said Aragorn. “I feared your wound might be paining you. You have had a long day with all the preparations for our departure." He glanced towards Arwen. “ You can speak freely in front of Lady Arwen. She knows all about the burden you bear.”

“I am simply tired,” said Frodo. “My shoulder isn’t hurting or anything.” His hand moved towards his waistcoat pocket and then to the chain around his neck.

“It is better if you try not to touch the Ring, Frodo,” Aragorn said gently.

“It seems so ordinary,” said Arwen. “At least from what I can see of it. I half expected it to glow or emit evil vapours of some form.”

“Would that it were just a plain old ring!” said Frodo. He pulled the chain from beneath his shirt. “Look! It appears to be a plain gold band, albeit an especially fair one, of which there must be thousands. Sadly, the fate of Middle-earth lies bound up in this Ring!”

“It is indeed fair to look upon,” said Arwen. She bent down to better examine the ring. “Who could think that such a pretty thing could be so evil?”

“How I wish that Bilbo had never found it!” said Frodo.

“Better by far Bilbo than one of Sauron’s minions,” said Aragorn grimly. “It is not a burden I would wish on either of you, though, Frodo.”

Frodo’s fingers reached absently towards the Ring again. Seeing Aragorn’s gaze upon him, the Hobbit clasped his hands together in front of him determinedly. “It seems to call to me, Strider,” he said. “Have you ever heard its call?”

“Indeed I have,” Aragorn said soberly. “It called to me that night in Bree when we first met and again when you offered it to me at the Council. It seemed to whisper in my ear, suggesting that I would be a mightier King than even Elendil were I to take it. Then I recalled how it beguiled even so great a man as Isildur and led him to his death and I resisted the temptation.”

“You will be as mighty as Elendil, Estel,” said Arwen. “You have no more need of a magic bauble than he did.”

“Gandalf told me of Isildur’s sad fate,” said Frodo. “Goodness, I’m forgetting my manners. He gestured towards a plate of cakes on a nearby table. “Would you like one? I wonder however Master Elrond’s cook knows these are my favourites.”

“I suspect that Bilbo told everyone here a great deal about you long before anyone even set eyes upon you!” Aragorn chuckled as he spoke.

The three enjoyed cakes and conversation for a while until Frodo was unable to stifle a yawn. Aragorn suggested that the Hobbit prepare for bed. “Make the most of Rivendell’s comforts while you may,” he counselled before bidding Frodo good night.

Aragorn was about to return to the Hall of Fire when Arwen caught his arm. “Walk in the gardens with me for a while,” she pleaded. “The stars are especially beautiful tonight.”

Hand in hand, they strolled through Rivendell’s winding pathways. The bare branches of the birches looked especially fair under the silvery light of the moon and stars.

“It was here beneath the birches I first beheld you, Estel,” said Arwen.

“I have loved you from that moment on,” said Aragorn.

“Something stirred in my soul even then,” said Arwen, “though it took me longer to know my heart. Now it is given into your keeping.”

“It gladdens my heart that we can have this time together ere I depart,” said Aragorn.

They paused in their walk and for a moment gazed into each other’s eyes. Then their lips met with increasing passion.

“Marry me!” cried Arwen when they finally broke apart for breath.

“There is nothing I would desire more, vanimelda,” said Aragorn. “Should this quest succeed and I gain Gondor’s crown we can finally be united.”

“But what if it should fail?” said Arwen. “Then I will be left alone and bereft without even a child of yours to remember you by. These are troubled times, we need only to speak our vows to each other, according to the custom of my people and we would be lawfully wed. I know my father desires for us to wait, but what can he know of the great longing I feel for you?” She kissed Aragorn again, this time with even greater hunger.

“Vanimelda!” He pulled her close. She was trembling, but not from the cold.

He kissed her back, feeling the heat rise within him. More so than was usual in their brief touches, Aragorn noted. Why, it was as if the very blood in his veins was turning to fire. The part of him that was Elrond’s pupil observed that this was foolish exaggeration; but no matter. This was not mere desire; this was a great burning tide roaring up within him. All of Aragorn’s body and heart seemed aflame. He had to take her, make her his; for now and all eternity! For the first time, oddly, he thought of Fëanor’s obsession with the Silmarils with sympathy. Why should he wait on the querulous, cautious whim of Elrond, who had not touched a woman in five hundred years; when Arwen was warm, wanting, and the light of Aragorn’s life? His. His own, and more precious than even the Silmaril that Beren and Lúthien had wrested from Morgoth’s crown!

“Bestow your child upon me ere you leave!” pleaded Arwen. “May the stars shine upon our union as I call on the Valar and the One to witness that I take you for my husband now and until the breaking of the world.”

“Must I leave you?” said Aragorn, kissing her again. “How could I depart having known the sweetness of our union, especially if you were to carry my child? Let Halbarad take my place, he could protect Frodo as well as I could. I have already given more years of my life than I care to think about defending the Shire and Bree.

All I receive in return is the suspicion and ingratitude of fools. Let us make a home in the Angle together. I cannot give you the luxuries you deserve, but we will be together. ”

His kisses became increasingly ardent and he fumbled with the fastenings on her cloak. She made no attempt to resist. The garden faded from his perception, as did the stars, and even the biting winter cold. It seemed that the world contained him and Arwen alone. The fire in his veins increased. Why should he be forever at the beck and call of others, constrained by duty and accident of birth, denied even the nightly pleasures that the humblest cottager might enjoy? He wanted Arwen now, wanted her to be wholly his in body and soul so that no one could dispute his claim to her, wanted to lie entwined in her arms without the barrier of clothing between them. His fingers moved to the fastenings of her gown.

Arwen reached to unfasten his cloak. Her slender fingers reached inside his shirt, tenderly caressing his skin.

Aragorn moaned with pleasure at her touch.

“What of Gondor’s silver crown that you were born to inherit?” asked Arwen after a few moments had elapsed.

Aragorn reluctantly released her lips to answer. “An empty dream, alas,”  he said bitterly. “Denethor will never accept me; nor would Boromir. Then there is another son of Denethor’s whom Boromir claims is even more like unto their sire than he is. What hope do I have?”

“I would be happy in the meanest hovel, could I only share itwith you, Estel,” said Arwen. “Come speak your vows to me then we can retire to my chamber together. Long have I desired to lie beside you as your bride.”

Aragorn took her hand. “I call upon the Valar and the One to witness,” he began. He then looked up at the stars. The Star of Elendil shone brightest of all. Aragorn started as if awakening from a dream His head spun. Then a fresh breeze from the river seemed to blow away a veil from his senses. He took a step back from Arwen. “What are we doing?” he cried. “I gave Frodo my word to serve him; I gave your father my promise I would not take you as my bride until his conditions were fulfilled! What madness almost came upon me?”

The starlight caught the emeralds adorning the Ring of Barahir upon Arwen’s finger. “The Ring!” she cried.

Aragorn laughed bitterly. “The evil thing seeks out the weaknesses of those it seeks to tempt,” he said. “It offered us what we wanted most, not wealth or power but union with one another. I know now more than ever that I must embark upon this quest, as it sought so strongly to dissuade me from doing so.”

“And I, alas, acted as its instrument,” said Arwen. “I tried to lead you astray from doing what you know to be right.”

Aragorn kissed her tenderly on the brow. “It was not your doing, vanimelda, but the cursed trinket that Frodo carries that undid my forefather.” He drew Andúril and held the sword aloft. The blade glittered in the moonlight. “I swear I shall not let the Ring entice me to stray from the right path again. I shall only take you as my wife when I can swear to cherish you in front of all with your father’s blessing.”

“May Varda hear you and give you strength, beloved,” said Arwen. “I shall wait for you to return to me in triumph and make me your wife. Until then, I shall be with you in thought on every step of your journey.”

“I go forth strengthened by your love, vanimelda,” said Aragorn. “The way will be long and hard for Frodo, but somehow I will help him find a way to achieve the quest. By the power of your love, I will return victorious.”

Written for the February Teitho Contest where this story was placed second.