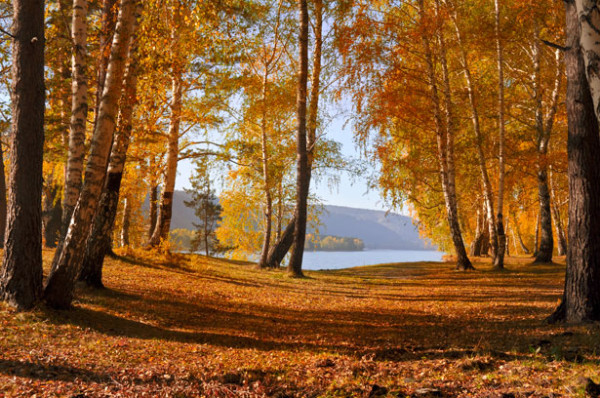 Summary: Arwen is in a melancholy mood

Aragorn expected to find his lady with their children, or maybe with her brothers and grandsire. When she was nowhere to be found, he assumed that she must have gone riding with Faramir and Éowyn, but when the Steward and his lady returned from their morning ride, the Queen was not with them.

Aragorn began to feel a little worried, though his common sense told him that there were few dangers lurking at Rivendell. He decided, though to go in search of her. What if some sort of accident had befallen his beloved wife?

He donned his cloak, went outside, and looked around him, listening intently. His keen hearing detected no cries of distress. Some unknown force directed his footsteps to where he had first beheld his love beneath the birches.

It was there that he found Arwen, just as he had done so long ago. Today, though, she was not singing. Her head was bowed and her footsteps dragged as she walked along the leaf- strewn path. A chill wind blew through the orange- clad birch trees.

“Arwen, vanimelda!” he cried. She lifted her head to look at him and he could see that she had been weeping. He stretched out his arms and she buried herself in his embrace. He gently stroked her hair.

“What ails you?” he asked her after a few moments.

“Summer is past and the leaves are falling,” she replied. “Winter will soon be here.”

“Rivendell is fair in every season,” Aragorn replied.

“My mother loved to walk here in the springtime,” said Arwen. “We would watch for the first primroses. Then later, we would gather daffodils, great armfuls of them to decorate the Hall of Fire with.”

“I recall my mother liked to gather lavender from the gardens,” said Aragorn. “How I wish we could show both our mothers the spring flowers in the Citadel or in Ithilien!”

“I remember one summer before I departed to Lothlórien, I would walk here with my father,” said Arwen. “Little then did I think I would I would never see my mother and father again.” Her voice trembled slightly.

“I miss my parents too,” said Aragorn.

“You, though, will one day be reunited beyond the Circles of the World,” said Arwen.

Aragorn’s heart lurched violently. “Do you regret the choice you made, beloved?” he asked. His voice was unsteady now.

How could I regret our love and the children you have given me?” Arwen said fiercely. “Never!”

“Maybe it was a mistake to return here if it brings you such pain,” said Aragorn.

Arwen shook her head. “It has given me such joy to see our children explore my childhood haunts,” she said. “I would not have missed witnessing Faramir’s joy in my father’s library for the world, nor Éowyn’s delight in the stables. It makes me happy too to see my brothers and my grandsire here with the children.”

“Then what troubles your heart, my love?” asked Aragorn.

Arwen gestured towards the carpet of fallen leaves, swirling in the breeze. “My people are fading, even like scattered leaves. One day my brothers and grandsire will sail and their household with them. There will be none left who recall Rivendell! We too will fade and die and be blown away on the wind even as these fallen leaves.”

“We will not be forgotten, vanimelda. Remember, we will leave our children behind with the memories we have given them. And those memories will be glorious as these autumn hues! Know too, that Ilúvatar gave Men a gift and not a curse. There is more than memory beyond the Circles of the World. The generations of Men are like the leaves, fresh and new with each spring.”

Arwen reflected on his words for a few moments. Then she smiled. “You are indeed elven-wise, Estel,” she said.

“I would need an elven lifespan to be truly elven-wise,” Aragorn said ruefully. “Maybe Men reflect more on the passing seasons as they mirror the seasons of our lives. Your folk dwell forever in spring or high summer. I used to love autumn as a boy. I would walk amongst the leaves with my mother and enjoy the crunching sound they made underfoot. Then my mother would  tell me  to  try and catch one as it fell.”

Arwen reached out her hand and almost immediately caught a falling birch leaf. Aragorn laughed. “You are much better at the game than I!”

A little later, Faramir became concerned that the King and Queen had not appeared for the noonday meal and went in search of them. He was surprised to find them both engrossed in trying to catch the falling leaves. He was about to slip away quietly when Aragorn caught sight of him.

“Come and see if you can catch a leaf, Faramir!” the King cried.

“I used to play that game with Boromir,” said Faramir. “I have many happy memories. I should love to revisit my youth but the noonday meal awaits us.”

“Let us bring the children here this afternoon,” said Arwen. She laughed merrily, her melancholy blown away with the autumn breeze.