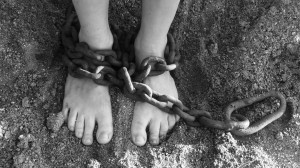 Summary: Who were the galley slaves whom Aragorn freed?

The whip cracked. Beren hardly flinched. At the beginning, it had terrified him, but now he felt only a bleak numbness. Keep on rowing, however much every inch of your body ached, and you were spared the whip.

He had been a fisherman once until the raiding party had come and taken him with the others in his small craft. That other life seemed but a dream. Now there was nothing but pain, sweat, stench, and the weight of rattling chains. Beren could not recall when he had last felt the sun nor not suffered the pangs of hunger and thirst. Hope at long since fled. Beren could do nothing other than struggle to survive and not be one of those thrown overboard when the corsairs no longer deemed him useful.

Suddenly, Beren heard the sound of a horn blowing somewhere in the distance. It was unlike any other sound he had ever heard. The sound seemed to be not of this world. Even in this place, such an unearthly blast sent chills down his spine and turned his blood to ice.

Fear gripped him and his fellows. They cried out in alarm. The whips ceased to crack as panic seized his captors. Beren heard a series of loud splashes followed by silence.

It seemed almost that time had stopped. The only sounds were those made by scurrying rats seeking to escape.

After what seemed like an eternity, he whispered to his fellow chained beside him. “They’ve gone, I think.”

“Leaving us here to starve, if the rats don’t get us first,” his companion said grimly.

Beren made no reply. It seemed he would find release only in death. A grey mist seemed to surround him and the ghostly horn calls grew louder. His heart pounded so fiercely he felt as if it might explode.

A stranger entered the hold, Beren and his fellows flinched. Had their previous captors been overpowered? Might their new ones be even worse, if that were possible?

The man lit a lantern and Beren could see that he was no Corsair. The stranger wore a grey cloak with gems upon his breast and his brow, which gleamed like stars in the lamplight. “Do not be afraid!” he said. His voice was clear and commanding, but also filled with kindness. “I am Aragorn son of Arathorn, heir to Elendil. The Corsairs have flung themselves overboard and you are now free men. Your chains shall be struck off. There is one favour I would ask of you all, though, that you row me and my men to Minas Tirith ere you depart where you will. The very fate of Gondor hangs upon us reaching the City in time.”

He gazed at Beren and his fellows and his gaze was like no other, both kindly and compelling. The fear left them and they cried out “Long live Aragorn, son of Arathorn!”

Gladly Beren rowed those last few leagues. He would follow this man to the very bounds of Mordor.