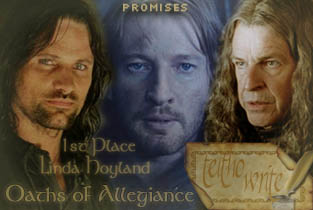 The characters are the property of the Tolkien Estate. No profit has been, nor will be made from this story.

With grateful thanks to Deandra.

Dedicated to Larner on the occasion of her birthday.

Faramir dressed with especial care, flicking imaginary specks of dust from his black tunic. This was one of the most important days of his young life so far. He was determined to be perfectly turned out and not to let his fellows down, or even more importantly, his father.

Maybe Denethor would smile upon him today as he took the all- important oath that all soldiers were required to swear before they took up arms in defence of Gondor.

Faramir and his fellow recruits in the Ithilien Rangers had recently completed their training and been declared fully- fledged soldiers the previous month. Now all that remained was to take the oath to the Ruling Steward, Faramir's father and lord.

Their captain called the young men together and they prepared to march the length of the great hall in single file. Faramir noticed that Mablung, his friend, was trembling slightly. He was to blame for his trepidation. Usually, the young Rangers took their oath in Ithilien with their Captain standing in for the Steward, but as this bunch of recruits included the Steward's younger son, they had been summoned to the City for their oath taking. Faramir stole a glance around the hall. His heart swelled at the sight of Boromir, who was at the front of the assembly clad in his Captain General's full insignia. Boromir was one of the youngest ever to hold the office, but was already proving himself more than capable.

Faramir's thoughts wandered back to the day when Boromir had taken his oath, watched by adoring younger brother. Boromir had taken the oath alone, not as part of a troop and a large celebration had been held to mark the occasion. Denethor had beamed with pride when Boromir had recited the words perfectly in a loud clear voice. Faramir was determined that he too would make his father proud today. For a moment, he felt a pang that no celebration was being held in his honour before mentally shaking himself for such foolishness. He was not the heir, but the second son.

Their captain gave the signal and the young Rangers marched forward in alphabetical order. One by one, they presented their swords to the Steward, then knelt on the floor beside his chair and swore fealty.

Faramir dropped on his knees before his father and presented his blade. His mouth suddenly felt dry as parchment. His father's face was stern as Faramir placed his hand on the hilt of his sword and spoke the familiar words in a clear voice without faltering. "Here do I swear fealty and service to Gondor, and to the Lord and Steward of the realm, to speak and to be silent, to do and to let be, to come and to go, in need or plenty, in peace or war, in living or dying, from this hour henceforth, until my lord release me, or death take me, or the world end. So say I, Faramir son of Denethor of the House of Hurin."

"And this do I hear, Denethor son of Ecthelion, Lord of Gondor, Steward of the High King, and I will not forget it, nor fail to reward that which is given: fealty with love, valour with honour, oath-breaking with vengeance."

The oath spoken and the pledge given and received, Denethor, without any change of expression, handed Faramir his sword back. Faramir sheathed it. It was done. He was a fully- fledged soldier now and his father was now his liege lord. He supposed he should feel different somehow. Instead, he just felt empty. He had so hoped to see a proud and loving smile upon his father's face this day. He shrugged resignedly. Obviously, it was not to be.

Faramir dressed with especial care, flicking imaginary specks of dust from his black and silver tunic. This was one of the most important days of his life and he was determined to be perfectly turned out and not to let the people down, or even more importantly, his King.

Yesterday, Aragorn Elessar had been crowned and today he would receive the oaths of allegiance from the Lords of Gondor. Faramir, as Steward of the Realm, would be the first to take that oath. His heart swelled with pride and gratitude as he recalled the events of the day before when the King had returned the White Rod to him and promised that he and his heirs would hold that office as long as the King and his line endured.

Faramir had already made his oath privately to his new liege lord, soon after Aragorn had brought him back from the very brink of death. Aragorn had told him that oath would suffice. The Steward knew, though, that there were many within the Realm whose first loyalties were to the House of Húrin. It was important that they see that he freely swore fealty to his new lord.

Faramir made his way to the great hall, shadowed by a guard as befitted his new rank. The Merethrond was packed with the assembled nobility, as well as those of the common folk who could squeeze their way in. His thoughts wandered back to the day many years ago when he had taken the same oath of allegiance to his father. Denethor was dead now, as was Boromir. For a moment, his heart was filled with sorrow. Then he caught sight of Éowyn, almost in the same spot where Boromir had stood long ago and his spirits lifted. Imrahil, who was in line behind him, patted his arm encouragingly.

Aragorn, arrayed in kingly splendour, was seated high up on the long vacant throne of his forebears. Faramir noted that a velvet cushion had been placed at the foot of the steps. A wry smile formed on his lips as he wondered what his father would have thought of this.

The herald stepped forward and blew a fanfare on his silver trumpet. "Step forward, Faramir son of Denethor, Steward of Gondor!" he cried.

Faramir walked forward and prepared to draw his sword to present it to the King. He wondered how many of the steps up to the throne it was appropriate for him to climb to do so.

Then, much to his amazement, Aragorn stood up and descended the steps.

Faramir dropped to his knees in front of him, drew his sword, and presented it. The Steward gripped the hilt and spoke the oath in a loud clear voice that all assembled might hear, "Here do I swear fealty and service to Gondor, and to the Lord and King of the realm, to speak and to be silent, to do and to let be, to come and to go, in need or plenty, in peace or war, in living or dying, from this hour henceforth, until my lord release me, or death take me, or the world end. So say I, Faramir son of Denethor of the House of Hurin."

"And this do I hear, Aragorn son of Arathorn, Lord and High King of Gondor, and I will not forget it, nor fail to reward that which is given: valour with honour, oath-breaking with vengeance; fealty with love."

The King returned Faramir's sword to him, his eyes smiling. He then grasped both of Faramir's hands between his own. His hands were warm; they were the hands that had restored Faramir to life.

When Faramir returned to his place, his heart was singing.

A/N. This story was written for the Teitho "Promises" challenge where it was placed first. Some lines are quoted directly from Tolkien.