Disclaimer: The characters are the property of the Tolkien Estate. No financial profit has been, nor will be made from this story.

Arwen is weary of being compared to Lúthien.

A/n. Some dialogue is taken directly from Tolkien 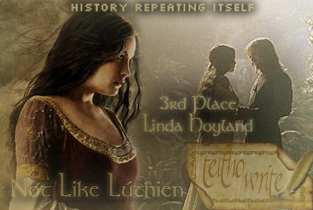 Lúthien! Sometimes she seemed to haunt Arwen and dog her every footstep. Folk say that she is so like her, it were as if she were reborn! How can they be so certain? None save her Grandparents had ever actually beheld her.

Arwen paused in front of the tapestry that adorned the Hall of Fire and gazed at he image of her renowned foremother. Yes, she had the same glossy dark hair, ivory skin, and grey eyes, but then so did many of her folk.

How could she be like Lúthien? Lúthien was one of the bravest who had ever lived. She had enchanted the Dark Lord with her singing to enable her beloved to snatch the Silmaril from his crown. Arwen was certain she would faint with terror should she ever have the misfortune to be in Sauron's vicinity. While her voice was sweet enough, she had never known one of her kind who could not sing well. She very much doubted her singing would entrance Sauron or any of his minions. Most likely they would devour her before she even had a chance to open her mouth!

Lúthien had wed Beren, a mortal, who had come upon her as she danced in a woodland glade and called her Tinúviel. Arwen never knew quite what to make of this part of the story. She supposed it was wonderful to love someone so much that you would plead for their life in Mandos' Halls, and forsake your immortality and your kinsfolk for them. But was it not also rather foolish?

She had met mortal men in plenty. She pitied them, such frail creatures and as short lived as dragonflies almost without being as fair! How could her wise and beautiful foremother have given her all to one of those fragile, scruffy, blemished creatures? She studied the likeness of Beren, a less than imposing figure, who had been banished to a corner of the tapestry. He looked somewhat like the many Heirs of Isildur that her father had sheltered over the years. Hardly surprising, as they sprang from his line as much as she did.

She had yet to meet her father's latest foster son. How old would he be now? Was it twenty already? Time had little meaning for Arwen. Days, months, seasons and years came and went, all rolling into one. Likely it was more than twenty years ago since she had last looked at this tapestry, but it might well have been yesterday.

She supposed she would have to meet this latest fosterling. No doubt, he would be just like his predecessors- a callow youth who would make sheep's eyes at her and follow her around like a love- struck puppy! What was his name? Araborn, Arathorn? Their names were all so alike. No wonder her father called him Estel. She wished her father would foster a few Dúnedain maidens too, who would be more suitable objects of affection for the young men!

The shadows were growing longer. It would soon be sunset. Arwen decided she would take a walk. The birches would not be in leaf yet, but she could walk beneath their slender white trunks. She asked her maid to bring her favourite mantel of blue embroidered with silver and left the house.

It was a perfect spring evening, but Arwen remained in a pensive mood. The wind blew her hair and her thoughts wandered to her mother far beyond the western sea. Maybe she would join her there soon?

Her reverie was interrupted by singing. It was obviously the voice of a mortal as it lacked the bell- like quality of the Elves. It was a pleasant enough voice, though, deep and rich. He was singing the Lay of Lúthien. Arwen sighed. Was there no escape from her famous foremother?

The singer came into view. It was a young man of about twenty years of age. Arwen knew at once who it must be; the latest foster son that her father and brothers spoke so highly of. He was comely for one of the secondborn. His sparkling grey eyes were almost like those of an Elf.

As soon as he beheld her, he ceased his song and stood gazing at her.

"Why do you call me by that name?" she asked the young man.

"Because I believed you to be indeed Lúthien Tinúviel, of whom I was singing. But if you are not she, then you walk in her likeness," he replied.

"So many have said," she answered gravely. "Yet her name is not mine. Though maybe my doom will be not unlike hers." A sudden chill breeze blew across Arwen's face and something she could not describe stirred within her. Why had she said that? She was Arwen, not Lúthien! But what if her fate were indeed to be entwined with Lúthien's? Surely not! Yet, for the first time, the idea did not repel her. Instead, a shiver of excitement made her skin tingle. Was Lúthien's fate truly so undesirable? She had known a love that the bards still sang about. Her fate had been bitter but also sweet.