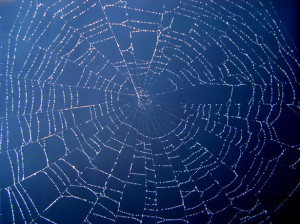 (http://www.publicdomainpictures.net/view-image.php?image=4467&picture=spiders-web)
Summary: During their trip to Rivendell, Aragorn and Faramir enjoy an early morning walk.
Rating: PG
Warnings: Brief mention of spiders
Beta: (optional)
Author's Notes: Events take place the day after “Autumn Leaves”.
Disclaimer: The characters are the property of the Tolkien Estate. No profit has been, nor will be made from this story.

Aragorn was awakened by an early sunbeam streaming through the window. For a few moments, he lay there listening to the soothing sounds of the distant waterfall and birds singing outside the window.

It was too perfect an autumn morning to lie abed for long, though and Aragorn desired to make the most of this rare visit to his childhood home. He slid from the bed, taking care not to disturb his still peacefully sleeping wife. There was no sign of the children being awake yet. No doubt, they were tired out after spending the previous afternoon trying to catch the falling leaves.

Aragorn swiftly dressed and went outside into the gardens. They were not as he recalled them from his childhood, having fallen somewhat into neglect since Master Elrond’s departure. He found their current wild beauty more to his taste, though. He had too many childhood memories of being scolded for accidentally damaging some carefully tended flowerbed while playing with his ball.

His footsteps crunched the autumn leaves that strewed the paths. It was a perfect autumn morning with a clear blue sky and just a hint of frost in the clear air. The dew bedecked grass and bushes sparkled like diamonds in the morning sunlight.

Aragorn rounded a bend in the path and realised he was not alone. Faramir had also risen early and was standing contemplating a hawthorn bush intently. He spun round when he heard the leaves crunching beneath Aragorn’s feet.

“Good morning, my friend,” said Aragorn. “I see you are up with the sun too. I hope you slept well?”

“I fell asleep as soon as my head touched the pillow last night,” said Faramir. “I can still hardly believe that I am actually visiting Rivendell.”

“It gladdens my heart that I could bring you,” said Aragorn. “Gondor should fare well enough in your Uncle’s care for a few weeks.”

“I did not wish to waste a single moment of my visit here,” said Faramir. “I have left Éowyn and the children to sleep a little longer while I took a walk before breakfast.” He returned to his contemplation of the bush.

“What has caught your attention there?” Aragorn asked.

Faramir stood aside so Aragorn could see what he had been looking at. “I was admiring the spider’s web,” he said. “Is it not most fair? I love the way the dewdrops glisten upon it. Is it not wondrous that so small and ugly a creature as a spider can create such a marvel?”

Aragorn studied the web for a few moments before replying. “It is indeed. I envy you that you can see beauty in a spider’s web. I remember too well the hideous spiders’ webs I saw at Mirkwood when I delivered Gollum there, and the tales Frodo and Sam told me of Shelob’s lair. Then there was that monstrous spider we slew that stung you in Lossarnach.”

“I know full well of evil spiders,” said Faramir. “But I believe that when the Great Music was created, Eru intended spiders only for good purposes. It was Melkor, who corrupted them to his purpose. These humble common spiders do much good by catching flies, while their webs are surely as intricate as anything Vairë might weave in her tapestries. Gossamer silk adorned with dewdrops sparkling brighter than twinkling stars! ”

Aragorn smiled and clapped his friend affectionately on the shoulder. “You are always quite the poet, melon nîn. Only you could wax so lyrical about a spider’s web!”

“I shall show it to the children after breakfast,” said Faramir. “I hope the sun will not have melted the dew by then.”

“This talk of breakfast makes me hungry,” said Aragorn. “Unlike the spider, I have no desire to catch my own this morning.”

“I smelled bread baking when I passed the kitchens,” said Faramir. “And the chickens here lay especially tasty eggs.”

“Then let us go and break our fast,” said Aragorn. “Our ladies should be up and about by now.”

Side by side the two friends strolled back to the Last Homely House. 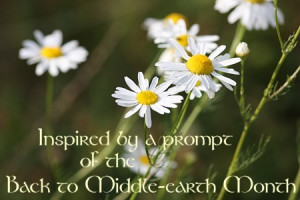