Well, it is March 1st and Aragorn's birthday, St David's Day in Wales and the start of BTME.

I'm not quite sure what I'll be doing this year. I have submitted a story to the BTMe compilation which will be revealed later in the month and I'm very much hoping my Muses will be inspired to write something else too.

I love the idea of the comments challenge so readers can take part in BTME too.

It was seldom that Aragorn’s journeys took him to Rivendell, especially at Midsummer. It was usually in winter’s depths that he visited his childhood home, more often than not in need of help for himself or for his people.

Today, though, fresh from despatching a band of Orcs that he had tracked across the wilds, he found he was only a few leagues from the Elven refuge. He could not resist the lure of a few days spent in the company of old friends. Besides, it would be as well to alert Master Elrond that Orcs had been roaming so near to his borders. There might well be more of the foul creatures abroad.

He entered the familiar Hall of Fire and was surprised to find it almost deserted, apart from a couple of elderly Dúnedain widows he had sent there a few months before to be treated for a variety of winter ills in the comfort their advanced years deserved. He greeted them warmly and enquired after their health before asking where everyone was.

“Why, have you forgotten the date?” cackled one dame. “It is Midsummer and all the Elves are outside celebrating the Opening of the Gates of Summer as they put it so poetically!”

“I’d much liefer sit here by the fire,” said the other old dame somewhat disapprovingly. “Gallivanting around in the woods is for the young, thousands of years old though they might be! Not that I see much point in it myself.”

“I’m sure you did your share of gallivanting when you were young,” said her companion.

“Not I. I courted my Beren in my parents’ home in the proper manner, while you, I recall…”

Aragorn left them to what he well knew was friendly bickering and made his way to the chamber that was always kept ready for him. He swiftly washed and changed into the elven style clothing that he kept here in his clothes chest. Master Elrond was saddened by the pledge he and Arwen had made, but had reminded Aragorn that this was his home where he was never less than welcome.

Aragorn helped himself to some food from the almost deserted kitchens then wandered outside and made his way towards the woods from whence he could hear the faint sounds of well- loved elven music.

For some reason he could not explain, he turned aside from the main path and wandered off amongst the birch thickets. He intended to join Master Elrond and his household, but not just yet. Maybe it was because there seemed so little to celebrate of late. The Enemy grew ever stronger and with each year that passed, he lost more good men from his already meagre band of Rangers. Each death hit him like a blow. He was their leader. He always felt he could have somehow done more to protect his people. Then there were his own desires; as far away from being accomplished as ever. Would he be the last heir to the Kings of Old destined to grow old and die unwed and childless? Yet all around him was filled with new life and growth. The balmy air smelt sweet enough almost to intoxicate him. Who could be downhearted on a perfect summer day? Yavanna’s gifts were at her must abundant. His sprits lifted and his heart soared with thankfulness

His steps had led him to clearing amongst the trees. It was then as if time fell away and he was again the high- spirited youth who had first beheld her, who would forever more haunt his dreams.

She was dancing now, as she had then, but unlike him, the passing years had left no mark upon her brow. A carpet of elanor was beneath her bare feet and roses were bound in her  flowing raven hair.

This time, though, she wore no gown and mantle, which lay folded beneath a great tree, but only a simple linen shift, which showed her graceful curves to perfection. Aragorn gasped. He had never beheld her thus before and she was even fairer than he had dared imagine. He trembled and flushed slightly.

Arwen sensed the presence of another and abruptly ceased her dancing. Then seeing who the intruder was, she smiled, and ran towards Aragorn and enfolded him in her arms. “Beloved!” she cried, between pressing kisses upon his lips. “I came here to dance alone, since I thought I could not dance with my beloved.” She gestured towards her discarded garments. “I desired to feel closer to the sun and the wind. Varda surely sent you to me this day! Come, dance with me and we will honour the opening of the Gates of Summer!”

Aragorn’s head spun with a mixture of delight and desire. Yes, dancing would be good and distract him from thoughts he knew that he should not dwell upon until they were man and wife. Reluctantly, he pressed a final kiss upon her warm lips then held out his hand to her.

She laughed the sound like the ringing of a silver bell. “You would dance shod at Midsummer?”

He joined in her laughter and pulled off his boots and stockings together with his outer tunic. “Am I clad to your liking now?” he asked, glancing ruefully at his feet, which seemed so large and ugly beside her dainty ones. The grass felt soft and inviting beneath his feet.

“Very much so.” Arwen began to sing.

Aragorn took her hand and together they began to dance, swirling and twirling in a giddy ecstasy. Time and space seemed to dissolve until they were no longer two, but one with each other and the breeze and the tree and the sky.

“What is happening?” Aragorn murmured in Arwen’s ear, though he scarcely cared, so lost was he in the moment.

“A little Midsummer magic of my people,” Arwen replied. “Do you not like it?”

“Then I shall wed you at Midsummer so the magic of our love will never fade.” 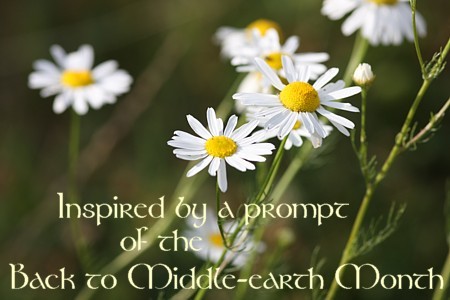 Written for BTME2013 and revised and reposted in honour of Aragorn's birthday.


Many Names and Guises

"In the hour of birth, or on some other occasion of moment, the mother might give a name to her child, indicating some dominant feature of its nature as perceived by her, or some foresight of its special fate."
Format: ficlet
Genre: family
Rating: G
Warnings: none
Characters: Aragorn, Arwen, Eldarion
Pairings: Aragorn/Arwen
Summary: Eldarion is puzzled why his father has so many names.
Disclaimer: The characters are the property of the Tolkien Estate. No profit has been, nor will be made from this story.

For he went in many guises, and won renown under many names. - Tolkien